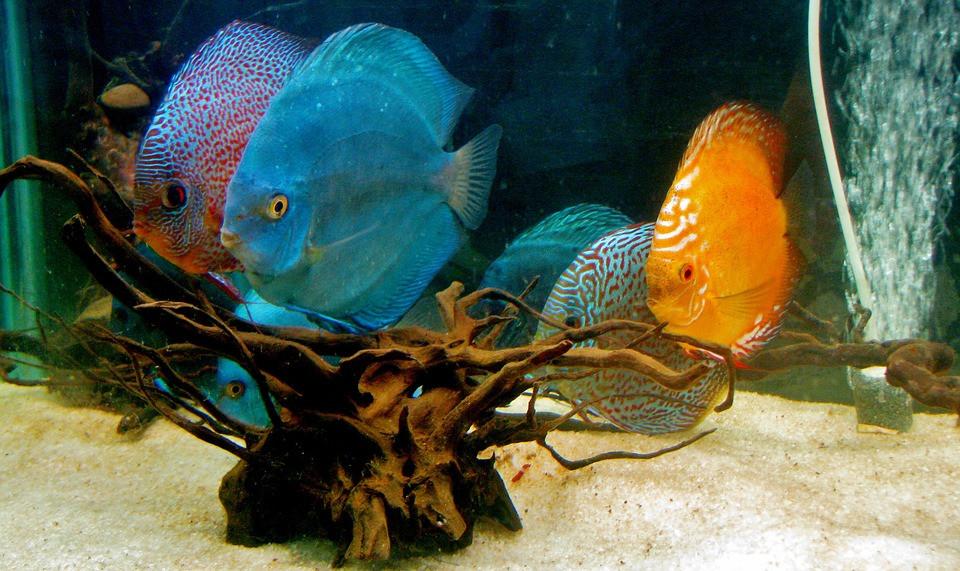 They are a total handful, they are usually best kept alone in a tank as they will harass any other fish in the aquarium and they are scary to feed. Just look at this video by Mbuna Marcus of his Wolf Cichlid. Several times in this video his Wolf Cichlid went right for his fingers while eating and splashes water over his floors! These fish do not mess around!

This is one crazy looking exotic freshwater fish. They have giant front teeth which is where the name vampire comes from. They are very aggressive fish that require expert level maintenance. Most of these fish usually will not live very long in captivity unfortunately. They usually only eat live fish and will rarely accept frozen foods. They are best suited for a species only aquarium with most aquarists who keep them only have a single fish in the tank.

This hybrid cichlid was created by breeding a Texas Cichlid and a Flowerhorn Cichlid. They are difficult to find and usually available seasonally from breeders. They command a high price tag since they are hard to find.

There are so many African cichlids we could list here. Since many of them are often confused as saltwater fish by many people who see them for the first time, I felt that it was best to include most of African lake cichlids in one group. There are some Africans that you can get for cheap like assorted Mbunas from a local fish store. However, there are specific varieties of African that can command prices over $100. If you are interested in learning more about African Cichlid tanks and care, please sure to check our earlier blog post.

A very beautiful exotic freshwater fish that originates from Malaysia. In Asia, they are considered a bringer of good luck. Flowerhorn Cichlids come in a variety of colors including reds, blues, pinks, yellows, and oranges. They are an aggressive Cichlid species and prefer large tanks all to themselves.

While most hobbyist will think a Pleco is a common freshwater fish, they really are a unique exotic freshwater fish. Many varieties like Snowball, Zebra,Golden Nugget, and Royal Plecos are examples on how exotic looking Plecos can be. There are common plecos which can get fairly large typically around 12-18 inches in length and there are smaller varieties like Bristle Nose Plecos which are suitable for smaller aquariums.

The most expensive Pleco to date was the L250 Pleco sold back in 2004 for over $10,000 in Japan; however, most Plecos do not sell anywhere near that . There are several types of Plecos that will sell for over $100 though.

When one thinks of exotic freshwater fish, this is usually the fish most people think of. They can be expensive, have a variety of colors, are very delicate, and require excellent water parameters. Discus belong to the Cichlid genus and originate from South America. They are very social with members of their own species. They will also breed in the aquarium, which has created an industry of cichlid breeders where some top strains will sell for several hundred to thousands of dollars.

They are considered very challenging where they even intimate advanced aquarium keepers! If you are considering Discus and are new to keeping them, starting with an easier to keep discus breeder varieties like Stendker Discus or purchasing only domestically breed discuss will increase your chances to succeed.

When most of us think about stingrays, we think about the saltwater variety. There are freshwater varieties that originate from the Amazon. Beautiful, bold, and unique looking they are difficult to resist if you have a big enough aquarium. This exotic fresh fish is also venomous. While there are no known cases of a freshwater stingray causing a human fatality, they have been cases where the sting has caused numbness at the wound site several years later!

The rarest stingrays also command high price tags. One such stingray at the Taiwan Expo featured a Polka Dot Stingray with an asking price of $100,000!

An extremely popular freshwater fish due to its prehistoric cosmetic appearance, the Arowana is well known exotic freshwater fish. They are known for jumping as high as 6 feet in the air for prey in the wild and have been known to jump out of aquariums. They get very large and are usually housed in an aquarium at least 125 gallons or larger. A common Arowana can be purchased for around $50 to a few hundred dollars.

However, certain Arowanas can fetch extreme price tags. Prized Arowana like the Platinum Arowana can sell for over $300,000!. These Arowanas are considered so valuable that they have microchips implanted into them before they reach sexual maturity to help identify and authenticate it.

In Japanese culture, the Koi fish is celebrated as a noble creature. It is said that Japanese Koi are able to climb large waterfalls bravely, which symbolizes that incredible achievement is possible with hard work. It is also said in Koi lore that if a Koi fish is caught, it will lie on the cutting board awaiting its death without fear, similar to the Samurai warriors. There are also legends stating that if a Koi climbed the waterfall on the Yellow River, it would be transformed to a Koi Dragon.

With such great history, lore, long life spans, and respect for these fish, there is no question for this fish to be #1 on our most exotic freshwater fish list. In fact, the most expensive koi on the list demands a staggering price tag of over $2,000,000! You can see the prized fish in the video below:

What Has Been Your Experience With These Exotic Freshwater Fish? 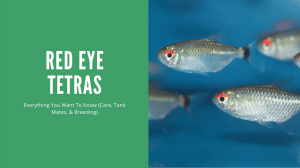 Despite their dull colors, unlike most tetras, the redeye tetra is adored by many aquarists that adorn their aquariums with bright red hues with yellow accents to add opulence to their interiors. If you're also looking to add outstanding variety to your home aquariums, let's dive into the characteristics of the redeye tetra.
View full article → 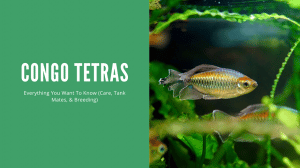 Every single time when you try to convince yourself to start out as an aquarist, you are always held back by hesitation. You know that there are uncountable fish species in the aquarium line. But, you don’t know which fish species will be ideal for a first-time aquarist like you. Don’t worry, Congo tetra has the capacity to comply with your needs and demands. This freshwater fish species knows exactly how to stand out. Their low-maintenance leads you directly to diversify your range of aquarium fish species completely trouble-free.
View full article → 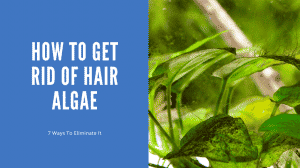 Are you struggling with a hair algae outbreak? This common nuisance algae leaves many aquarium keepers frustrated and even has some people tearing down their tanks. It affects both fresh and saltwater reef tanks, but the good news is you can get it under control. If you want to learn how to get rid of hair algae in your aquarium, this article is for you!
View full article →

Sign up to get the latest on sales, new releases and more…
40 shares