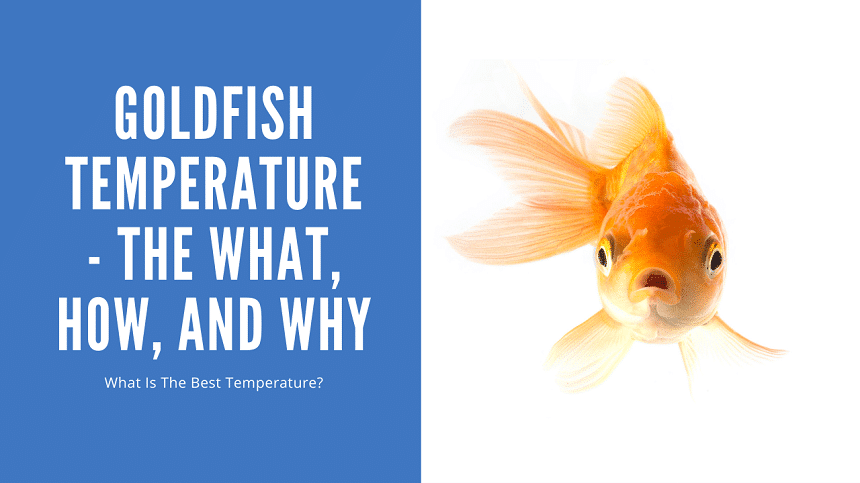 Ah, goldfish temperature. This is such a contested topic. An oft-repeated adage about goldfish is that they are cold water fish, and therefore should not be put in warm water. This is somewhat untrue.

You might not know this, but Goldfish can live in water of different temperatures. But what’s the range? What temperature is best for a goldfish? Why does it matter so much? Goldfish are some of the hardiest fish you will find, yes. And because of this, they certainly can survive at colder temperatures, but that’s not always the ideal setting for them to thrive in.

In actuality, putting your goldfish in water of the wrong temperature can have irreversible adverse effects, and might even lead to death. You also have to take other factors into account, such as the species.

In this article, we’re covering everything you need to know about goldfish temperature. Let’s get started!

The correct water temperature for a goldfish isn’t so easy to figure out given that they can live in a wide range of temperatures. However, for all intents and purposes I’ll give a quick and general answer:

The ideal water temperature goldfish will thrive in is between 65 and 72 degrees F / 18 to 24 degrees C.

Now, the temperature range mentioned above is a general range for all goldfish. But it’s important to remember that these fish are mainly divided into two main categories: fancy and slim-bodied. And knowing about fish types will help you to determine the right water temperature range more easily.

Let’s have a look at the differences between the two types, and the associated temperature conditions.

What is a Fancy Goldfish?

The main deal with fancy goldfish is that they are more modified—genetically speaking—than slim-bodied goldfish. It’s also important to understand that these fancy fish are much more prone to freshwater fish diseases if their tank environment is incorrect.

As such, these goldfish need more specific temperature and living conditions, and are better suited to tank living than pond living. They can’t survive in a wide range of temperatures, and as such, they should also not be kept in a tank with overly cold water — or water that is too warm.

Here are some of the most commonly kept goldfish of the fancy variety:

What is a Slim-Bodied Goldfish?

If you know about comets and shubunkins, you already know what slim-bodied goldfish are. They are one of the most popular choices for novice aquarists. They are much more hardy, fast, and athletic than their fancy counterparts. This allows them to do pretty well in varying tank water qualities and cooler tank temperatures. This suitability to various water conditions makes them suitable for living outdoors. In fact, it’s actually recommended to keep certain slim-bodied goldfish in a pond instead of a tank, because they can grow quite large in size.

Many people wrongly think that slim-bodied goldfish aren’t as attractive as the fancy kind, but this is untrue. You will find many common goldfish with unique and appealing physical traits, such as large nostrils, distinctive head growth, funny eyes and flowing fins. They also come in a variety of colors.

Here are the best known fish in this category:

Now that you know more about the differences between fancy and slim-bodied goldfish varieties, you can probably begin to guess that they have differing tank requirements when it comes to water temperature.

Compared to other fish, goldfish of the slim-bodied variety are much better able to withstand fluctuating temperature changes and environments, such conditions would not only stress out a fancy goldfish but even put them at risk of death.

So, it ultimately comes down to this:

Fancy goldfish should be kept at a tank temperature between 65 and 72 degrees Fahrenheit if you want them to have a long and healthy life.

In contrast, slim-bodied goldfish, as we have already established, are much better able to withstand colder water temperatures resembling those of outdoor ponds. They need a tank temperature between 65 and 72 degrees F, but have the ability to survive winters outdoors and can tolerate higher temperatures better.

Goldfish are exothermic, which means that their surrounding temperature determines their body temperature. They absorb and release energy from and into the water—which means the bodily functions of this fish are entirely dependent upon the water temperature being correct.

Digestion, immune system, respiration—these are all metabolic functions that are directly affected by water temp. The higher the goldfish water temperature in your tank, the faster these processes will be.

So, for goldfish kept in a tank with a temperature of 75 degrees, for example, you’ll have to provide 5-10 times more food than those kept in an outdoor pond where the temperature might be as low as, say, 58 degrees. In fact, they can actually get much colder. In this example video below by David Cook, his pond froze over and water temperature was around 41 degrees F. You can see the fish are exhibiting dormancy and we can see slim-bodied goldfish in the pond.

When it comes to indoor tank temperatures, you also have to take into consideration the toxicity of ammonia concentration. When the water temperature is higher, the likelihood of poisoning from toxicity in the tank is higher. This becomes a bigger issue in aquariums as the overall tank volume is lower.

For fish that you’re keeping in home aquariums, it’s important to take into account the temp range of your household. As a rule, aquarium water is at least 2 degrees warmer than room temperature1, so you need to take steps to cool your aquarium water by other means. This is particularly true if you’re keeping your pet in a warm climate.

First, ensure that your goldfish tank or tanks are not placed near direct sunlight. Next, you have the option of using your existing air conditioner or ceiling fan to cool the water (in the latter case, it’s recommended to remove the goldfish tank lid to allow the water to cool faster).

Alternatively, if you have money to spare, you might want to look into investing in an aquarium fan or a mobile AC for your fish. Some people like to float ice packs in their goldfish tank, but we don’t recommend this as it can change the tank temperature too much too fast—and that can lead to temperature shock for your pet. Mobile AC units are an unconventional, but very effective and cheaper solution over many chiller options

Working through your room temperature is the best way to manage heater. An aquarium chiller is a consideration, but typically very expensive and not as versatile as a mobile AC solution that can function as a backup system in the event your central AC unit goes down.

Temperature Shock and How to Deal With It

Sudden tank temperature fluctuations can lead to your fish experiencing temperature shock. Changes of even 2 degrees can shock your fish. So, when you’re performing water changes, it’s crucial that you ensure the new water is within 2 degrees of the old water. For this, it’s recommended that you use a digital aquarium thermometer to measure the water temperature.

Now, it’s a very important part of goldfish care to know when your fish might be suffering from temperature shock. Here are the most common symptoms, which are similar to those of oxygen deficiency:

If you think your fish have been afflicted by temperature shock, don’t do a big water change to set things right. This can be counterproductive and actually over-stress your fish anew. Gradually bring the water temperature up if it has gone down.

In the case of an overheated aquarium, you can follow the steps we outlined in the above section to quickly but manageably bring the temperature back down. This includes using a fan or air conditioner, or floating a frozen pack in the goldfish water. But be careful of not making the situation worse.

If you live in a climate where you continually face problems of too-hot fish tanks, you might want to consider getting an aquarium chiller for your fish, if you can cover the cost.

Do They Need an Aquarium Heater?

Once again, this depends on the type of goldfish you have, as well as your surrounding climate. Fancy varieties can certainly benefit from the stability of an aquarium heater if the temperature tends to fluctuate in your tank, or if your home is located in a cold environment, or if  the temperature is below 68 °F (or 20°C).

You don’t have to get a tank heater for most slim-bodied goldfish. These guys can usually take good care of themselves and are very adaptable.

Absolutely. The temperature of goldfish water determines their reproductive abilities. Male fish release higher amounts of androgen, a reproductive hormone, during spring time, and less of it during winter. This is because larvae are more likely to survive in spring temperatures. So it stands to reason that, if you’re interested in goldfish breeding, you need to recreate these environment conditions.

The water conditions and temperatures at which you keep your aquatic pets greatly impacts their health and capabilities. If you want a more low-maintenance fish, we would not recommend getting yourself a fancy goldfish since they require stricter temperature conditions. But for slim-bodied fish, you should be prepared to keep them in an outdoor pond.

Also remember that the temperature of the water in your tank should also be suitable for the other fish inhabiting it. So choose your goldfish tank mates wisely.

If you have any questions about caring for goldfish or want more information on them feel free leave us a comment below!

Mark is the founder of Aquarium Store Depot. He started in the aquarium hobby at the age of 11 and along the way worked at local fish stores. He has kept freshwater tanks, ponds, and reef tanks for over 25 years. His site was created to share his knowledge and unique teaching style on a larger scale. He has worked on making aquarium and pond keeping approachable. Mark has been featured in two books about aquarium keeping – both best sellers on Amazon. Each year, he continues to help his readers and clients with knowledge, professional builds, and troubleshooting. 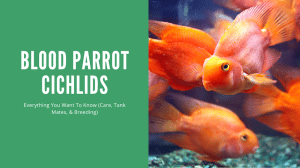 Have you ever seen a blood parrot cichlid? These adorable fish leave a lasting first impression on many aquarists, but their hybrid origin discourages many from actually taking them home. However, these unusual fish make great pets, so if you'd like to keep your own blood parrot cichlids, this article is just for you!
View full article → 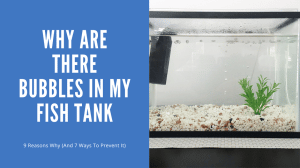 We all want clear glass and clear water in our fish tanks. However, sometimes we have bubbles messing up our view, and then we wonder - "why are there bubbles in my fish tank." There are various reasons why (we will cover the top 9), and there are several ways to prevent bubbles (we'll go over 7). Want to learn more? Read on!
View full article → 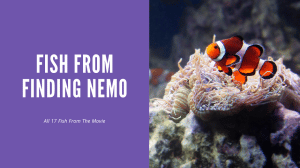 17 Fish From Finding Nemo (With Pictures)

There are also many other colorful and diverse species of fish that appear throughout the movie, such as anglerfish, jellyfish, and pelicans. Each of these fish plays a unique role in the story and helps to bring the underwater world of "Finding Nemo" to life. In this article, we'll explore the 17 different types of fish from finding Nemo that tickled our inner aquarists.
View full article →

Sign up to get the latest on sales, new releases and more…
3 shares