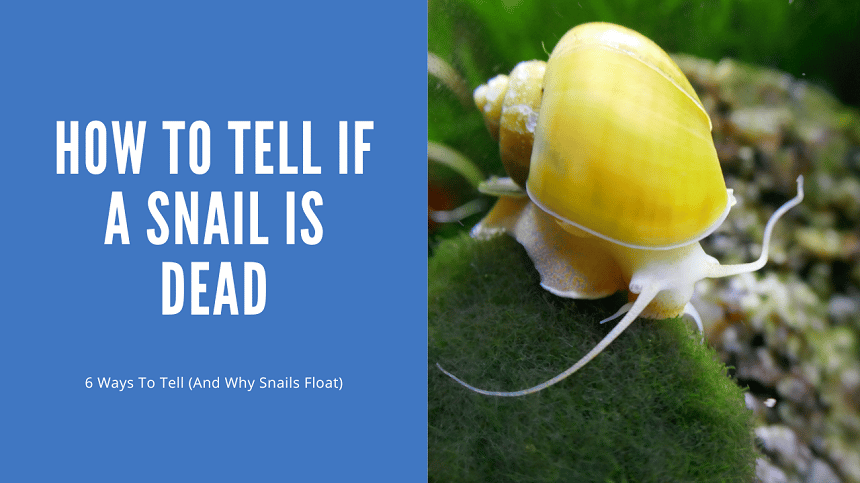 For an aquarium tank, nothing beats variety. If you have a community tank with fish of varied colors and patterns, how about adding some aquarium snails to add more excitement?

Aquatic snails not only look beautiful in a fish tank, but they are also great algae eaters and tank cleaners. It means they clean debris and waste matter from your fish tank which would otherwise pollute the water.

However, there are shortcomings in keeping snails as your pet. If you’ve ever kept a snail, you would know they remain inactive for a very long time—it’s quite common in snails. But sometimes, an aquarium snail dies and you might mistake its inactivity for hibernation.

In this article, I’m going to list 6 great ways on how to tell if a snail is dead.

Here are 6 obvious signs to see if your snail is dead or just sleeping.

The smell test gives the most authentic results. If you suspect that your snail is dead, take a sniff and you’ll know.

That’s because dead snails produce a lot of Ammonia and decompose very quickly, leaving behind a pungent smell like rotting food. I also advise testing your tank water because there are high chances of Ammonia spike that require immediate water change after removing the dead snail.

You can also sniff the foot of your snail if the shell doesn’t smell bad. A dead snail’s body, especially the foot will smell equally bad. However, poor water quality can also add to a stinky foot.

If your snail is alive but has smelly feet, consider doing partial water changes.

Look out the snail’s shell and body closely. When a snail dies, its body shrinks into the shell and then slowly decomposes. Look at the opening of the shell, if you cannot spot the body inside, it is most likely a dead snail. Also, when you hold the snail and it feels very light with nothing inside, the snail has died.

If the body shrinks, the snail produces a lot of ammonia shortly. Thus, immediate partial water changes and filtration is required to keep things at bay.

3. Check The Trap Door Of A Snail

This option is well suited for larger snail varieties such as Mystery snails or Apple snails. Carefully tug at the trap door of your snail. If it’s alive, you will feel resistance. But if it opens easily, the snail is dead.

4. Transport Your Snail To A New Environment

Another effective method to check if a snail is dead is to move it to a new environment. You can transport your snail to a smaller or larger aquarium or container with different water parameters.

The change in water parameters and overall environment would entice curiosity in your snail and it will most likely wake up to explore its new environment.

5. Check If Your Snail Reacts

Snails, almost like all living things, react to certain external stimuli. And so, you can tap the snail shell carefully to see if it reacts. Or you can also try tickling its belly to check if it retracts. If it does, there’s nothing to worry. But if it remains motionless, your snail is dead.

You can try holding the snail in your hands and exposing it against the flashlight or light bulb. If you see no matter inside or if the body is slightly shrunken, the snail is most likely dead.

How Long Can A Snail Go Without Moving?

In the wild, snails hibernate for around three years or longer without moving. However, aquarium snails sleep or remain inactive for around two weeks. The inactivity may be a result of a number of factors.

Why Does A Snail Die?

There are many reasons for a snail to be dead in your aquarium.

What To Do With Dead Snails?

The soft component of a dead snail is typically damaged or melted away when it decomposes. The snail in hibernation has a membrane within and its shell will be extremely fragile. If the snail has been dead for a while, all you find are empty shells.

You must remove any dead snails from the tank or the vicinity right away, whether they are in the water or on land, especially if there are other snails or marine animals nearby (in the case of an aquarium).

The dead snail body may occasionally be consumed by the fish in your tank before it turns poisonous to them. If not, quickly remove the dead snail before it contaminates the water.

I advise avoiding removing the shells from the water because they don’t deteriorate and add beauty to your aquarium. In addition to being useful as raw materials for numerous goods, snail shells are also quite aesthetically beautiful and can be utilized for clothing and home décor.

How To Distinguish Between A Dead Snail And A Hibernating Snail?

Nerite and mystery snails frequently go dormant for days at a time in aquariums. By examining its shell, you can tell a hibernating snail from a dead one. The shell of a dead snail is discolored, weightless, and lifeless. Even while the snail is hibernating, its slime keeps it glued to objects. However, dead snails don’t have clingy slime, thus they float away from any surface more frequently. In any case, don’t be too quick to discard your snail. It needs time to wake up.

Why Do Snails Float?

Many aquarium snail species float—including mystery snails that occasionally float (video source). So, Good news! Your snail might not actually be dead. Because they can store air inside their shells, snails have enough buoyancy to float.

Some snail species in nature purposefully float on the water’s surface so that they can be carried along by the current and move more quickly, perhaps in quest of better eating grounds.

In captivity, hunger is a frequent reason why snails float at the water’s surface, often upside down as they attempt to catch dangling food pieces.

Snails cannot thrive on algae alone, contrary to popular belief. To help keep the snails’ shells in good condition, be sure to add vegetables and other high-calcium foods to their diet.

Lift a floating snail carefully out of the water and give the shell a sniff if you’re unsure whether it’s alive or dead. If it doesn’t stink keep your snail floating.

How To Improve The Health Of Your Aquarium Snail?

Therefore, to maintain a clean environment, be sure to properly maintain your aquarium filtration system, perform weekly partial water changes, and completely vacuum the substrate.

Snails can handle water temperatures between 65° and 82° Fahrenheit and prefer a pH level close to 7.0.

Despite their small size, each of your snails needs at least 2.5 liters of water. That makes sure the mollusks won’t go hungry and gives each snail plenty of room to forage.

Leave a six-inch area below the tank lid or cover slide so that the snails can deposit eggs if you wish them to reproduce. Examine the aquarium lid and seal any openings that the snails might use to elude capture.

Aquatic snails may live for a short time without water, but eventually, they will become dehydrated and pass away.

If you raise an aquarium snail, be selective with your tankmates. Avoid fish including puffers, cichlids, goldfish, and some catfish that feed on snails.

How Do I Know If My Snails Died?

First of all, if your snail is not moving. You can try doing the following things to see if it’s dead.

1) Sniff the snail’s shell or feet to see if any foul smell is coming. If yes, your snail is dead. If no, it’s alive.

2) Examine the snail’s body properly. If it’s shrunken, your snail is no more. If not, it’s still there.

3) For larger snails, you can tug at the trapdoor to see any reaction or you can even transport your snail to a new fish tank or aquarium with different water parameters to see if it reacts.

4) Check out the snail shell with the help of flashlight to see if there’s any matter inside the shell.

A dead snail snail is the one with empty shells. When the snail is found hanging out of their shells or their shells are crushed, they are most likely dead. The dead snail are no longer slimy and have a different color that is darker than the original.

How Do You Know If A Snail Is Alive?

1) If the snail does not stink
2) If it reacts on external stimuli
3) Here’s a little test to check if your snail is alive:

Lift your snail out of the water and very carefully bring the back foot toward you, if the snail retracts, it’s alive.

Why Is My Snail Not Moving?

However, your snail will die below 23°F. If it’s too cold, put the snail in warm water to help it emerge from its shell and begin moving.

Is My Snail Dead Or Sleeping?

Your snail is probably sleeping, hibernating, or relaxing if it isn’t moving and is still clinging to the aquarium glass or decorations.

Why Did My Nerite Snail Die?

There are four possible reasons for your Nerite snails to die.

Freshwater snails are very popular in the freshwater fishkeeping niche. And now you know why!

Their fascinating and peaceful appearance is a go-ahead for any aquarists to raise them as pets. Now you know how to tell if a snail is dead or sleeping or hibernating or peacefully floating, things would be much easier for you. 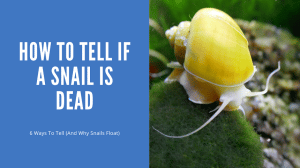 However, there are shortcomings of keeping snails as your pet. If you've ever kept a snail, you would know they remain inactive for a very long time—it's quite common in snails. But sometimes, an aquarium snail dies and you might mistake its inactivity for hibernation. In this article, I'm going to list out 6 great ways on how to tell if a snail is dead.
View full article → 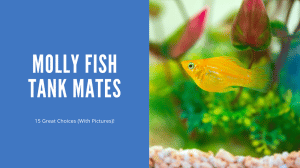 Do you keep molly fish? Congratulations, you have some wonderful pets! But did you know that molly fish can be kept with many other great freshwater fish? Choosing the perfect tank mates always requires great care, but this article will make your decision so much easier!
View full article → 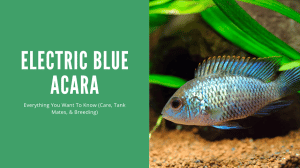 Are you thinking about adding an electric blue acara to your tank? If so, you're in for a real treat! These vibrant fish are sure to add some excitement to your aquarium. In this guide, we'll provide everything you need to know about keeping electric blue acaras healthy and happy. We'll cover everything from their ideal temperature range to their dietary needs. So, whether you're a beginner or a seasoned pro, read on for the essential information you need to care for these beautiful fish!
View full article →